I moved from camping at Succor Creek to camping at the Antelope Reservoir a bit west of Jordan Valley. A free campground with a total of four spaces. Three of the spaces are by the restroom and a fourth a bit further down the road. A nice place with big sky views. 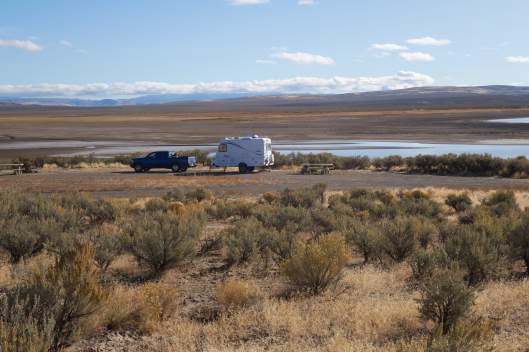 Today I headed west. I stopped by Jean Baptiste Charbonneau (Sacajawea’s son) grave. The brief description of him was tantalizing and want me to learn more about him. I imagine he would have been incredible interesting to talk to. 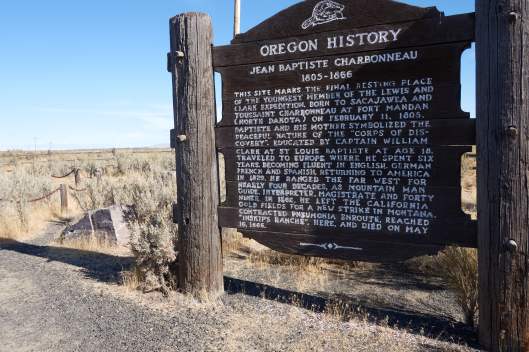 The grave was surrounded by beer cans/bottles, tennis shoes, and trinkets. I’m not sure what it is all about. Vampires? After life? 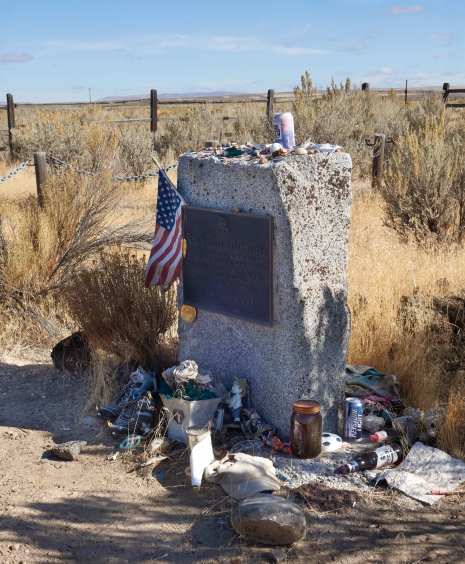 The Roman Pillars were my next stop. For me it was a bust. Fences on both sides of the road with one fence posted no trespassing. I had wanted to get out and wander; look close at the rock and adsorb the place. Instead it was a drive-by with a photo click out the window.

I then realized I had time to go see Chalk Basin. I got as far as the green gate I needed to open when a rancher drove up in an ATV.  We spent the next hour talking. The rancher had been in the middle of the fight to stop the formation of the Owyhee National Monument which would have encompassed his private land, leased land, and BLM grass he owned. When I left Seattle, one of my hopes was to talk and listen to a rancher/Trump supporter on this trip. From isolated urban Seattle; city of the left leaning left, the thoughts of the right leaning ranchers aren’t presented. He made my trip meaningful. I wish I had thought to tell him that.

I ran out of time and didn’t make it to Chalk Basin.

Next: Friday night the weather forecast indicates a low of 20 degrees. Brrrr. I haven’t camped in my trailer when the temperature is that low.