I came to the Lava Beds National Monument to see the caves and found so much more. The area is full of surprises, contradictions, and irony with a complicated history of war mixed in.

The geology of the lava tube caves was interesting but unexpectly it didn’t grab my interest. I felt an uneasyness as I ventured into the dark caves. And with my headlamp and a large flashlight both on, I couldn’t light up the cave to see the details of the rock. So I stopped visiting the caves and ventured out to see other sights I had heard about.

This tree is living in about two feet of rock over a cave.  And it looks healthy!

Pictographs- at a cave entrance.

A portion of Petroglyph Rock.  The fence at the bottom is protecting the petroglyphs.

Native people lived in the area long before the white man. In the 1870s the Modoc War occurred. A sad event in history when the Modocs were being told to live on the Klamath Reservation with a tribe that did not respect them and in land that was foreign to them. The result of the war was the fatality of 53 U.S. soldiers, 17 civilians, 2 Warm Springs Scouts, 5 Modoc women and children, and 15 Modoc warriors, five of which were killed in battle and the Modocs fighting the war were moved to Oklahoma.

The area was impacted again by war during WWII. Many of the young men left the area to fight in the war and some lost their lives and are commemorated at the Tule Lake Fairground Museum. Their story is told next to that of the German and Italian prisoners of war that were sent to Tule Lake to work in the agricultural fields. And the story of Japanese Americans who were held in a large segregation (interment) camp at Tule Lake.

With my head absorbing the irony and contradictions of the wars, I drove back to camp listening to a classic rock station that was playing songs from the 70’s with themes of love and peace. On the way I passed through the Tule Lake NWR and a smile returned to my face. There were birds – lots of birds swimming in the lake among the vegetation turning fall colors of yellow and orange. I turned and drove the levee roads enjoying all the different birds I saw. They were all peacefully living together.

A photo blind.  I found out about these blinds as I was leaving.  Next time I come I’ll spend some time sitting in one.

Not giving up of seeing more geology I drove to Glass Mountain. The mountain is south of the park and the drive is mostly through forest. And then the forest abruptly ends and – there is the lava flow. I walked through an area of an immense jumble of rock void of most vegetation and marveled at the power of the earth. We live on a seemingly peaceful land and below the earth’s crust is powerful magma that can erupt and drastically change our earth. 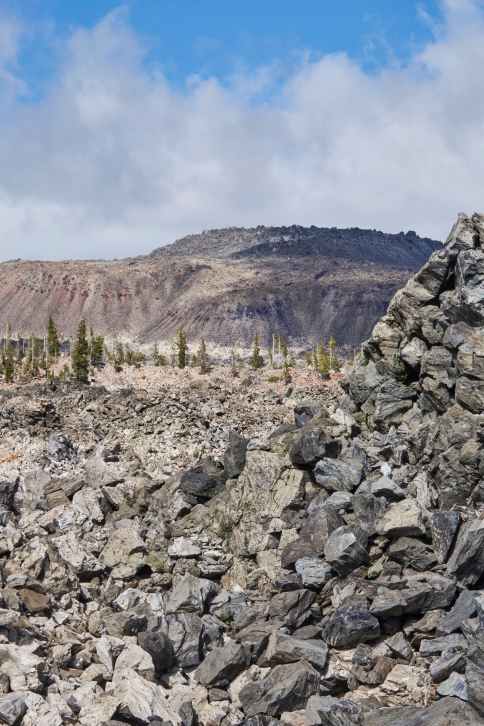 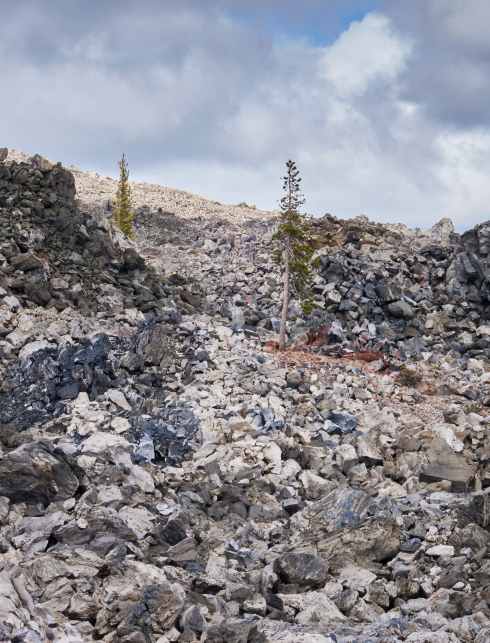